Punk in the Gym by Andy Pullitt

Notify me when back in stock

Andy Pollitt is as close to a Hollywood A-lister as the climbing world will ever get.

He had the looks, and he starred in all the big roles in the 1980s and 1990s - Tremadog, Pen Trwyn, the big Gogarth climbs, Raven Tor and the cult Australian adventures. Alongside co-stars like Jerry Moffatt, John Redhead and Malcolm 'HB' Matheson, he brought us sexy climbing - gone were the beards, the woolly socks and the fibre pile. Andy was all skin-tight pink Lycra, vests and brooding looks.

For those watching, Andy Pollitt had it all. But Punk in the Gym gives us the whole truth. The self-doubt, the depression, the drinking, the fags, the womanising, the injuries, the loss of a father and the trouble that brings, and a need for something - for recognition, a release for the pain, and, for Andy, more drinking, more tears, bigger run-outs.

With nothing held back, Andy tells his roller-coaster story from the UK to Australia, exactly as it happened. Exposing his fragile ego and leaving us to laugh, cry, marvel and judge, this is a sports autobiography like no other. The legendary routes are all here - The Bells, The Bells!, Skinhead Moonstomp, The Hollow Man, Boot Boys, The Whore of Babylon and Knockin' on Heaven's Door. And the route that broke him and robbed the climbing world of its Hollywood star - Punks in the Gym.

Be the first to review this product!

Help other shoppers by writing reviews for products you have purchased.

More from this category A Rocklimber's Guide to Selected Locations of 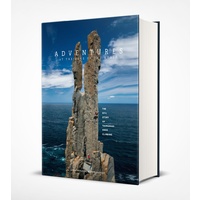 Adventures at the Edge of the World by Gerry Narko Rock Climbing Down Under by Simon Carter